My two brothers and I are very lucky to have been raised by loving, involved parents who made sure we were well equipped to become successful adults. They made sure we studied hard in school, ate right, and we were encouraged to get plenty of exercise by playing outdoors with our friends.

But, they realized that all this may not be enough. Just having a good education, eating a healthy diet, and rocking at Kick-the-Can and Hide-and-Seek would only get us so far in the world. We needed something else, something that could give us the financial wherewithal to fund our dreams. Some parents might have purchased savings bonds for their children; others might have invested in Disney stock.

Our parents bought us land.

Well, they didn’t exactly buy us land. What they bought were boxes of Quaker Oats brand Puffed Rice. This wasn’t just any old cereal, mind you: nestled inside each box was a Deed of Land granted by the Klondike Big Inch Land Co. Inc.; specifically a deed for one square inch of land in the Yukon Territory.

Yep, I became a land baron before I was out of diapers. 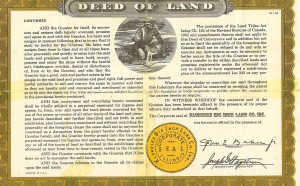 When I was old enough to truly appreciate the significance of my Deed of Land – not only for its tremendous future dollar value, but also for its ability to make my best friend jealous – I put the document in a protective plastic sleeve and placed it among my other valuable possessions. I occasionally brought it out when I wanted to dream of my future wealth or I needed to up my cred among my friends, but, for the most part, it remained tucked safely away until the day I would lay claim to my land and the prosperity it represented.

Given the significance of the document, I’m not sure how it managed to lay forgotten for many years until it was discovered when I was going through a box of childhood stuff.  There, along with my grade school class photos, Troop 202 Girl Scout sash, and Presidential Physical Fitness Award patch, was my Deed of Land.

Holding the slightly yellowed document in my hands, the dreams began again.

Maybe, over the years, someone discovered oil under my inch. Or, miners had unearthed a lucrative vein of gold running through it. Or, perhaps a developer had mistakenly built a shopping mall on my land and now I could claim a percentage of the total value (including back interest, of course). If land size inflated in the same way currency does, that square inch would now equal a whopping 8.7 square inches. Certainly that Deed of Land extracted from a cereal box many years ago would be worth a sizable sum today. Oh yeah: my ship had just come in!

Before contacting an attorney or hiring a wealth manager, I decided to do a quick Google search to get some idea of the volume of money that would soon be flowing my way. I also wasn’t quite sure where the Yukon Territory was or the location of the closest airport since I knew I’d have to venture up to the Great North to assert ownership of the square inch that was rightfully mine.

It was all a gimmick. What has been called one of the most successful ad campaigns in advertising history was a gimmick designed to encourage kids to pester their parents into purchasing Quaker Oats brand Puffed Rice cereal.

Back in the early 50’s, a brilliant advertising executive, Bruce Baker, developed a promotion tied to a popular Quaker Oats-sponsored radio show about Sergeant Preston of the Yukon and his trusty dog, King. Mr. Baker convinced Quaker Oats to purchase 19.11 acres on the west bank of the Yukon River for $1,000. The company divided the land into 119,870,000 square inch parcels and printed over 21 million Deeds of Land. Each one was individually stamped with a unique lot number – mine was L-595729 – and placed in boxes of cereal.

The promotion’s success went way beyond the company’s wildest dreams.  Pretty soon boxes of the bland, unexciting cereal were flying off the shelves.

Unfortunately for the millions of us now-graying kids who once dreamed of one day laying claim to our square inch of rugged paradise, the Quaker Oats never formally registered the land. The company determined that it would be a logistical nightmare to register the deeds to millions of children. Even if it could be done, it would have cost the company a fortune.

Not only do we not own our square inches now, apparently we never owned them.

To add even more insult to injury, the Klondike Big Inch Land Co., Inc. was dissolved in the 60’s and the Canadian government repossessed all the land for nonpayment of $37.20 in property taxes.

Years ago, a Quaker Oats spokesperson explained that “the deeds were not meant to have any intrinsic value, but rather to give the consumer the romantic appeal of being the owner of a square inch of land in the Yukon.”

Yeah, tell that to my lawyer.

21 thoughts on “The Klondike Big Inch Land Company: A Tale of Puffed Rice and Deflated Dreams”