In my last Spanning seven urban bridges post, I wrote about a recent hike my husband and I took called the Seven Bridge Walk. The 5.5 mile hike traverses through several older neighborhoods in our city and crosses over a mix of historic and newer bridges. That post featured the first three bridges we crossed; the four remaining bridges are just ahead…

The Quince Street walking bridge is a wooden-trestle bridge that was built in 1905. It is 236 feet long and rises 60 feet over Maple Canyon. Although the cost for the original construction was less than $1,000, the cost to repair the bridge in 1988/1989 was closer to $250,000. Even though I knew the bridge was in good repair, it was a little unnerving to look over the sides and see what looked like a hodge-podge of wooden planks holding it up.

Probably my favorite bridge on our walk is the Spruce Street suspension bridge located in the Bankers Hill neighborhood. It was constructed in 1912 to serve as a passageway for early residents to get to the newly built trolley lines. The bridge stretches 375 feet across and rises 70 feet above Kate Sessions Canyon, named after a horticulturist responsible for many of the plantings found throughout the city. The bridge swayed a little as we walked along it, but it didn’t feel dangerous at all. 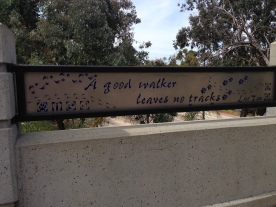 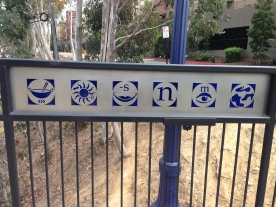 Can you figure out the word puzzle?

After stopping for lunch in the always interesting neighborhood of Hillcrest, we next reached the Vermont Street Bridge. This modern steel bridge was built in place of a deteriorated wooden trestle bridge that dated back to 1916. Rather than replace the beloved original bridge with a merely utilitarian passage, local residents fought for something more interesting and reflective of the two neighborhoods it connects. As we walked over the bridge, we read walking-themed quotes written by people like Martin Luther King, Jr., Kate Sessions, Pythagoras, and even long-time San Diego resident, Theodor Geisel, better known as Dr. Seuss. Can you figure out the word puzzle?

As we journeyed towards our next bridge, we passed through an older neighborhood dotted with beautiful craftsmen bungalows. I imagine an artist lives in this one. 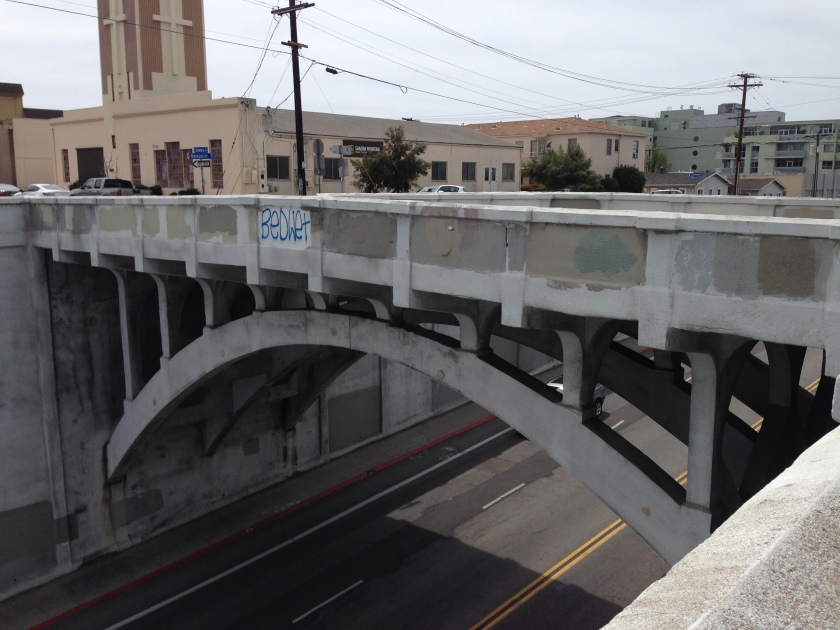 Finally, we reached our seventh and last bridge: the historic but hazardous Georgia Street Bridge. A redwood bridge was originally built here in 1907, but it was replaced in 1914. The “new” concrete Georgia Street Bridge is listed on the National Register of Historic Places. I’ve heard that it is scheduled for an $11 million dollar overhaul, including seismic and structural retrofits… hopefully they will begin soon before the bridge crumbles apart.

After crossing our final bridge, we zig-zagged a bit more, then headed back along Park Boulevard towards Balboa Park and our car. At 5.5 fairly flat miles, the walk wasn’t too strenuous but it was a lot of fun and, when we were finished, we felt a little like we had also traveled through time.