I’m not sure the full blame rests on Norm’s* shoulders, but it has become extremely difficult to travel to a new area and not look for interesting doors to photograph. On our recent trip to Vancouver Island, Canada, I was concerned at first that I may not have any doors to show for our efforts. Afterall, is a vacation without any pictures of eye-catching doors really a success? I think not.

Fortunately, the dearth of interesting doors that we first experienced was remedied when we drove to the northeastern end of the Island. The small communities of Port Hardy and Port Rupert are infused with the rich history and proud traditions of the Kwakiuti First Nation. There, we found beautiful art, traditional crafts, intricately carved totem poles, and yes, doors worthy of a Thursday Doors post.

A very different array of doors were waiting for us at the southern tip of the Island in Victoria, the capital city of British Columbia. We have visited Victoria before and – being July – the main waterfront area was overrun by tourists. So, we decided to head in the opposite direction to see what we could find

Our first stop was Fisherman’s Wharf where we found a flotilla of color and whimsy. Although still touristy (but less crowded), Fisherman’s Wharf is an eclectic collection of shops and restaurants, and floating private residences. Although we were careful to respect the privacy of the people living there, who could resist admiring the brightly painted homes and, of course, taking door pictures? Not me.

The rest of our walk included admiring the World’s Tallest Totem Pole (127 feet, 7 inches), discovering Mile ‘0’ of the Trans-Canada Highway (which spans the entire length of Canada – over 8,000 km), and visiting an old cemetery (which, I’ll admit, was the whole reason I suggested the walk in the first place). No doors, but indulge me in a few tourist pictures:

And finally, I have to share this last door that we saw just around the corner from the Parliament Building. 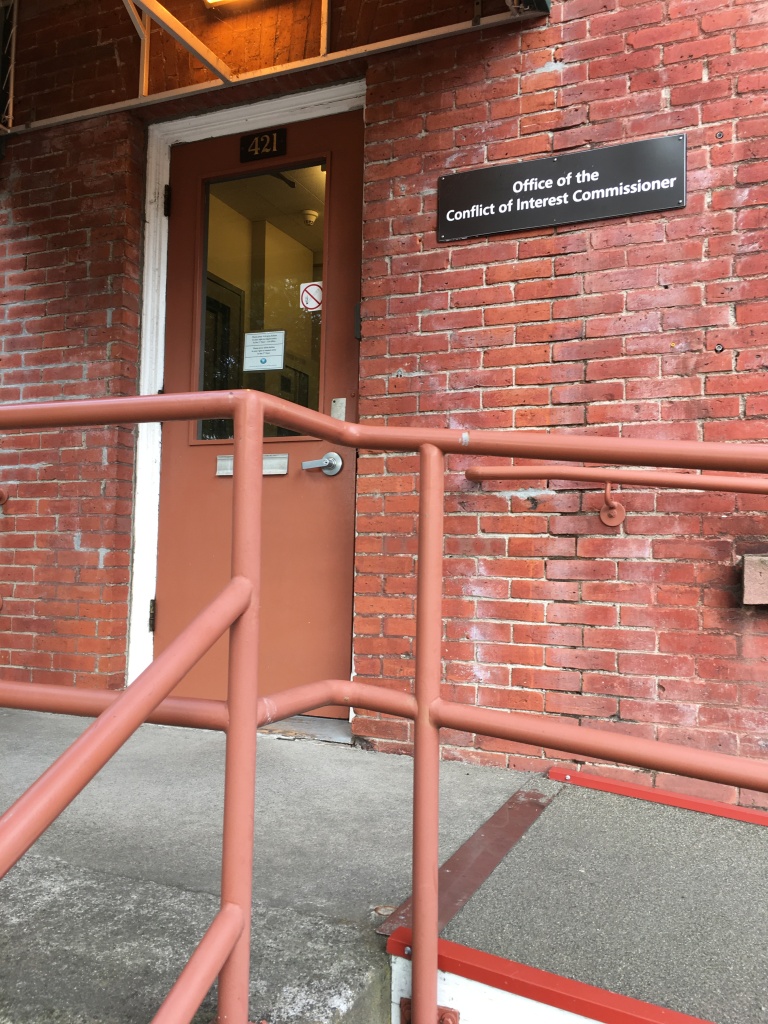 It is a terribly boring door, I’ll admit… but look who works inside: The Conflict of Interest Commissioner! According to a Canadian government website, the “Conflict of Interest and Ethics Commissioner is an independent officer of the House of Commons responsible for helping appointed and elected officials prevent and avoid conflicts between their public duties and private interests.” Imagine that! A government that believes so strongly that conflicts of interest should be avoided, they have created a dedicated office to help prevent them.

I think I just fell in love with Canada a little bit more.

* Thursday Doors is a weekly celebration of doors hosted by Norm Frampton (Norm 2.0). Head on over to see his beautiful collection of doors from Kingston, Ontario and to see what others have shared from around the world.