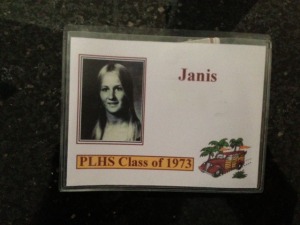 Last night I attended my 40th high school reunion. It was a little overwhelming to be surrounded by so many classmates that I’ve lost touch with over the years. I can count on two hands (and have a few fingers left over) the number of friends from back then that I still see even on a semi-regular basis. Of course Facebook “friends” add more to that number, but those contacts consist of periodic updates, not what I’d classify as actual relationships.

Although it was tempting – and would have been easier for me, an introvert in intense social situations – to spend most of the evening among friends I am still in contact with, I found myself drawn to those that I didn’t know very well in school. By venturing out of my comfort zone, I discovered quite a few classmates that weren’t in my circle of friends back then, but who I now wish I had known better over the years.

When we were in high school, I’ll wager that most of us wouldn’t have been able to predict what we would be doing 40 years later. Not only were we not fully-formed human beings capable of picking our adult careers, many of the jobs we hold now didn’t even exist then. Hopefully, our definition of a desirable mate has advanced past the low bar many of us set back then. What we did for “fun” back then probably would bore, or in some cases horrify, our adult selves.

I loved hearing about what my former classmates are currently doing. Many of them are working at interesting jobs; several were retired or, like me, close to retirement; some had avocations that were much more interesting and fulfilling than their vocations.

When invariably I was asked “so, what are you doing?” I found myself at a bit of a loss. I have a great job, but it’s hard to describe well in a few sentences. Besides, I won’t be doing it anymore in a few months. I wish I had been able to talk about an exotic trip I had taken recently, a cause I was lending my time to, or maybe an artistic journey I was in the middle of.

So, what am I doing? I’m focused on creating a new life in retirement; a life that is active, interesting, fulfilling, and one that will give me a lot to draw from when someone asks me what I’m doing.

Mid-December harvest, Southern California style. #vineripenedtomatoes #orangetree #southerncalifornia #nosnowforme #winterharvest
My agave 'blue glow' is beginning to flower. The stalk will grow rapidly and can reach up to 20 feet in the air. As exciting as this is, agaves are monocarpic so the flower portends the plant's coming death. What a way to go! #agave #agaveblueglow #agaveflower
Weathered wood and rusted iron. Age can be beautiful. #rust #doors #weatheredwood
A vine of purple passion flowers greets me along my daily walk. Mother Nature is an amazing artist. #passionflower
Gardening in the time of Covid. Normally, we'd be traveling this time of year so we haven't had a "real" veggie garden for a while. Blueberries are winding down (unless I get a second burst) and tomatoes, zucchini, and peppers are producing like crazy. Not a bad place to be hunkered down. #summergarden #purefood #abundance
Is it possible to be sad when you have a vase full of sunflowers? I think not. #sunflowers