Although we are in the fortunate position of not having to count pennies now that we’ve retired, my husband and I have been looking for ways to save money on our monthly bills. What we don’t send to the phone, internet, cable, water and other utility companies, goes into our savings and can be spent on better things like travel, dining out, and entertainment.

The first change we made was to install drought-tolerant landscaping. Not only is our yard more interesting visually, we no longer need to water a thirsty lawn. 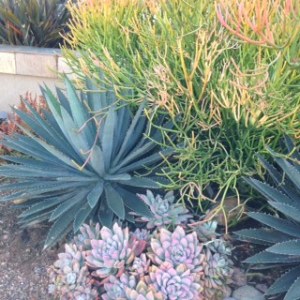 We’ve also ditched our landline. It seemed wasteful to pay over $30 each month for a phone that remained silent much of the time, except when it became a conduit for telemarketers and political campaign workers to reach out and annoy us. Since we make and receive most of our calls using our cellphones, that was an easy decision to make.

When we made this switch, we still wanted the option to direct certain calls to a number other than our cellphones so we bought an Ooma internet-based phone system.  After the initial purchase price, we now pay only applicable taxes and fees, which has been less than $4 each month.

Now, we are getting ready to say goodbye to our cellphone service carrier, Verizon. We don’t use a lot of data (we currently share 2GB but never use even close to that), and our talking and texting is on the low-side, so our current monthly bill of $130 (plus taxes and fees) for two phones  seems high. When our 2-year contract recently expired, we visited a Verizon store to find out what our options were. We knew that the major service carriers were feeling pressure from the smaller start-ups so we hoped to get a better deal.

We were disappointed to learn that Verizon’s “deal” involved the mandatory purchase of new phones and then monthly charges to pay off those phones. Even though they claimed that we’d no longer be on a 2-year contract, the new phone would be paid off at the end of – surprise! – 24 months. After that, the monthly installments would be removed from the bill and we could either keep our now fully paid for phones, or purchase the latest wiz-bang phone and start all over again. Um, no thank you.

Thinking that we could do better, we went in search of a carrier that offered decent coverage, a no-contract option, and one where we could keep our current, perfectly good phones. We found that there are quite a few smaller carriers out there and they all offer slightly different plan options. When comparing plans, we found that it’s important to accurately estimate current and (as much as possible), future data and minutes usage, and understand the carriers’ cell coverage.

After some research, we settled on the carrier that Consumer Reports and PC Magazine have rated #1: Consumer Cellular. Based on our usage and because we can continue to use our existing phones, the new monthly bill will be about $60 for our two phones. If (when) in the future we decide to upgrade our phones, our option would be to purchase the phones outright or pay for them in monthly installments. But, for now, we are happy with what we have… and saving $70 every month.

Next on our agenda is to see how we can say goodbye to our satellite TV bill. We aren’t completely sure how streaming and/or accessing digital content works, but I’m confident that we can figure it out. In addition, we are exploring ways to lower our internet bill (how did it get to be more than $50 per month??).