One of my fondest memories as a little girl was accompanying my mother downtown to go shopping. Going downtown often meant getting started early and catching several busses, but I considered it a great adventure. I loved getting dressed up and, best of all, having my mother all to myself for a day spent doing “girl stuff.”

There were several department stores to choose from, including Montgomery Wards, Sears, and Walker Scott’s. But, the locally-owned Marston’s was always our last stop because, when we finished shopping, we took the elevator up to the sixth floor to have lunch at the very elegant (at least to my young eyes) Tea Room.

This was before 1961, the year our city got its first shopping mall. After Mission Valley Center opened, there was no longer a need to go downtown to shop. The Center not only had two large anchor stores, it also had lots of specialty shops and a food court that offered a myriad of dining choices (but, sadly for me, none nearly as stylish as my beloved Tea Room). Ease and convenience won out over elegance. Soon after the shopping mall opened, the downtown department stores closed due to a lack of business.

Over the years, shopping malls have morphed as tastes and shopping habits have changed. Anchor stores have been swapped out as former retail giants have merged or have gone out of business. Names of stores that I grew up with are gone completely, replaced by new and different ones. Even with these changes, most malls remained busy and vibrant.

But, something different is happening to today’s malls that can’t be fixed by tweaking their tenants. With the rise of online shopping and the hit that retail stores took during the recession, brick and mortar shopping centers have experienced major declines in sales. Just as the lure of the mall siphoned customers away from downtown department stores, the internet is making it unnecessary to enter a store at all. Traditional retailers are suffering and malls are dying.

One of the former giants that is feeling the effects of the new normal is Macy’s. What began in 1843 as a retail dry goods store in Massachusetts, Macy’s changed, grew, and acquired other retailers to become the well-known brand it is today. But, now it’s in trouble. After a 2016 holiday season marked by disappointing sales, Macy’s announced the closing of 68 of its stores nationwide, resulting in the loss of 10,000 jobs. I recently visited a location that is closing, and it was a bit eerie. It was like going to an estate sale after someone very old had died. Oh, and they were a hoarder.

A chorus line of mannnequins 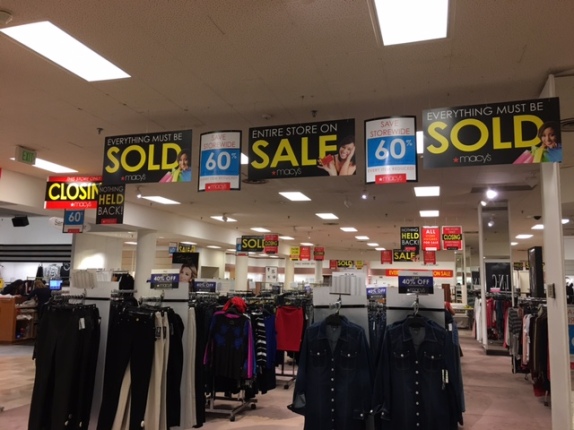 This modern phenomenon of ghost boxes and dead malls that were once retail meccas is probably only going to get worse. As customers seek out new retail experiences and become more and more comfortable shopping online, the idea of driving to the mall, finding parking, then foraging through racks of stuff you don’t want to find something you do, will seem anachronistic.

Most of us have seen those lists of items familiar to older generations, but that younger generations don’t recognize; things like rotary phones, film canisters, and library card catalogs. It wouldn’t be too surprising if, some day, shopping malls could be added to those lists for generations to come.

54 thoughts on “The changing face of retail”

Mid-December harvest, Southern California style. #vineripenedtomatoes #orangetree #southerncalifornia #nosnowforme #winterharvest
My agave 'blue glow' is beginning to flower. The stalk will grow rapidly and can reach up to 20 feet in the air. As exciting as this is, agaves are monocarpic so the flower portends the plant's coming death. What a way to go! #agave #agaveblueglow #agaveflower
Weathered wood and rusted iron. Age can be beautiful. #rust #doors #weatheredwood
A vine of purple passion flowers greets me along my daily walk. Mother Nature is an amazing artist. #passionflower
Gardening in the time of Covid. Normally, we'd be traveling this time of year so we haven't had a "real" veggie garden for a while. Blueberries are winding down (unless I get a second burst) and tomatoes, zucchini, and peppers are producing like crazy. Not a bad place to be hunkered down. #summergarden #purefood #abundance
Is it possible to be sad when you have a vase full of sunflowers? I think not. #sunflowers