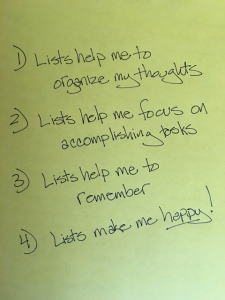 I love creating lists in the first place and I love crossing items off as they are accomplished. I’ve even been known to put tasks on a list that I’ve already completed just so I could check them off.

There is a list that has been floating around the interwebs that appears to be somewhere between a bucket list and a “done it” list. The items listed are a combination of places to visit and experiences to have, with a few things we may have done when we were younger (skipped school, played cops and robbers) mixed in for good measure.

When I first saw this list on Denise’s blog My Life in Retirement, I was curious to see how my check marks would compare to hers. If you are a list devotee like I am, you might also want to see how many items on the list you have done.

Although I checked off 45 out of 68, there are only around 9 of the remaining 23 that I either would like to do or have any hope of doing (travel to South America and scuba dive, for instance). As far as the other 14 are concerned, I either have no desire (get divorced or sing in church, for example) and/or certainly the time has passed (skipped school or have a child).

The list is by no means complete (Denise pointed out that “Visit Australia” wasn’t included – Been There for her, Not Yet for me), but I hope you’ll get the same feelings of satisfaction that I did as you check items off, and maybe you’ll be inspired to add a few others to your own To Do list.

(x) Swam in the ocean – not a big accomplishment, I live in Southern California
(x) Cried yourself to sleep
(x) Played cops and robbers – I had two older brothers, one who became a real cop later on
(x) Played cowboys and Indians – ditto (except neither of my brothers became a cowboy or an Indian)
(  ) Recently colored with crayons
(  ) Sang karaoke
(  ) Sang a solo or duet in church
(x) Paid for a meal with coins only – not a big meal, but a meal nonetheless

(x) Made prank phone calls – oh my god, we thought we were so funny!
(x) Laughed until some beverage came out of your nose
(x) Caught a snowflake on your tongue
(  ) Had a child
(x) Had a pet
(x) Been skinny-dipping
(x) Been fishing
(x) Been boating
(x) Been downhill skiing
(x) Been water skiing
(  ) Been camping in a trailer/RV

(x) Been camping in a tent
(x) Driven a motorcycle
(  ) Been bungee-jumping
(x) Gone to a drive-in movie
(x) Done something that could have killed you
(  ) Done something that you will regret for the rest of your life – isn’t it the things not done that we regret?
(  ) Rode an elephant
(  ) Rode a camel
(  ) Eaten just cookies or cake or ice cream for dinner – popcorn, yes
(x) Been on TV
(  ) Stolen any traffic signs
(x) Been in a car accident – not my fault… either time
(  ) Been in the hospital in past 24 months
(  ) Donated blood
(  ) Gotten a speeding or any other type of ticket in the past 12 months
(x) Gotten a piercing (ears count)
(x) Gotten a Tattoo – a radiation tattoo… not that fun
(x) Driven a manual transmission vehicle
(  ) Ever owned your dream car – I don’t really have a “dream car”
(x) Been married
(  ) Been divorced
(x) Fell in love
(x) Fell out of love
(x) Paid for a stranger’s meal
(x) Driven over 120 mph – 150 mph at the Bonneville Salt Flats: I’m not sure if it counts since my husband was at the wheel
(  ) Been scuba diving –  sadly only snorkeling, but it was wonderful!

Ever since the film “The Bucket List” came out in 2007, the phrase has become a part of the American vernacular. Whether or not the term pre-dates the movie, I have no idea, but it seems that now just about everyone has made some type of bucket list. It might be a list of things they want to do before they “kick the bucket” or it could be a list of places to visit or goals to achieve before a specific end time (going off to college or getting married, for instance).

When I first heard the term I thought it was a clever, light-hearted way to describe a list of experiences to be had and dreams to fulfill. I’ve used the phrase many times myself but, lately, what used to sound clever now strikes me as trite. In many cases, “Bucket List” trivializes the passion, desire, and curiosity that helped to create the collection of destinations and dreams I would like to pursue while I am still able to do so. These are not merely items on a to-do list to be checked off as I flit from one to the next, but real experiences to be lived and savored.

Recently, I was able to fulfill a dream I have had for as long as I can remember: travel to Cuba. I’m not sure what planted the seed of desire in me, but I have fed and nurtured it for many years. I’ve collected articles, accumulated books, and closely charted the political winds as they have raged, then calmed, then raged again, carrying my hopes with them. As close as Cuba is – just 90 miles from the tip of Florida – it might as well have been on another planet because of the travel restrictions placed on U.S. citizens.

Then, last fall, the right opportunity presented itself and we immediately said “yes”! The person putting the trip together had experience, passion, and a great sense of fun and adventure. We’ve never been interested in traveling with tour group before, but this one promised just the right combination of group time and free time. It would give us the opportunity to see parts of the country, learn about its culture and history, and have experiences that we would find very difficult to realize on our own.

All of the arrangements were made before President Obama’s December 17 announcement of the beginning of normalizing relations between Cuba and the United States. When we heard of the impending thaw, we were so grateful that we would see Cuba before the travel restrictions were lifted. We wanted to see Cuba before it is irreversibly altered by the deluge of American tourists that are sure to come once diplomatic relations are reestablished.

A few weeks ago, my husband and I flew to Miami to begin what would feel like a journey on a time machine, back to the late 1950s, before the U.S. imposed a trade embargo on this tiny island nation.

Key West: Separated from Cuba by 90 miles and 50 years