I have been considering making a few tweaks to my GratiTuesday posts, and the start of a brand new year seems like the perfect time to put them in place. I really enjoy writing these posts and, judging by the likes and comments they receive, they are popular and appreciated. Just as I had hoped, thinking about possible subjects for my (almost) weekly posts has helped to foster a greater awareness of the beauty and goodness around me.

My original intention was for these posts to be short ones. Easy to write, and quick to read. Pretty soon, though, they began to morph into longer essays, which, of course, take more time to put together (have I mentioned that I am a tortured writer?).

Starting next week, my GratiTuesday posts will often consist of just a photograph and a short expression of gratitude or appreciation. Most likely, the comment section will be turned off for these posts too. Easy to write, and quick to read. Changing the format will also give me a chance to concentrate more on my photography, which is a retirement passionette of mine. 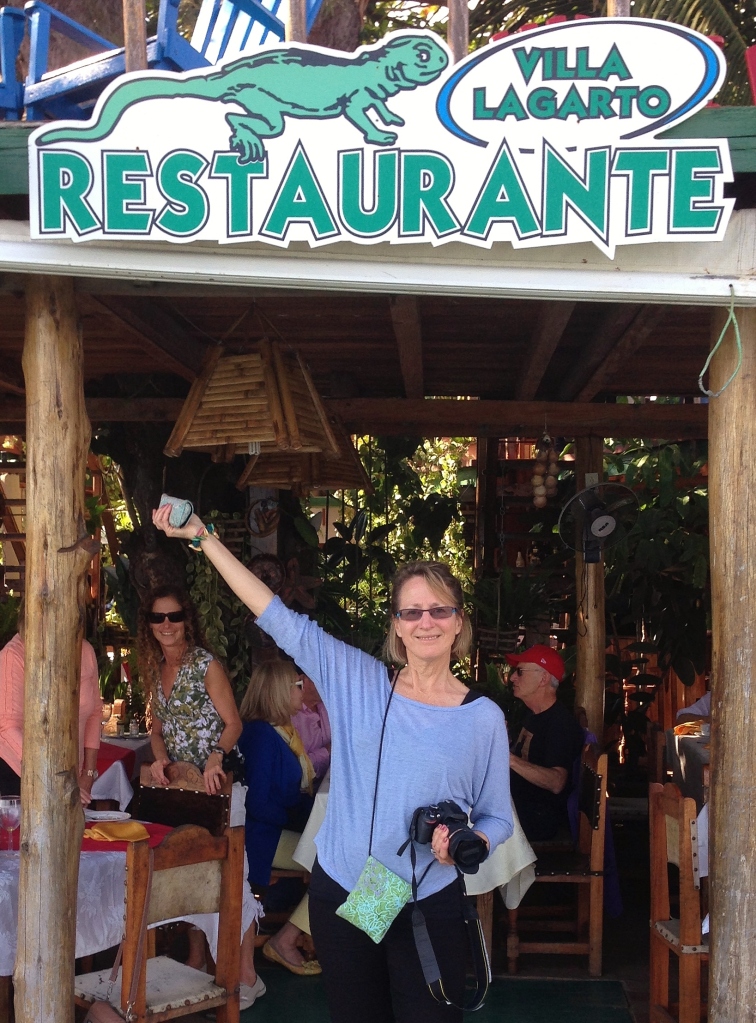 I am so grateful for the freedom retirement gives me to start, stop, revise, and adjust. Although I love the connections I make through my blog, I am looking forward to spending less time in front of my computer screen and more time enjoying this remarkable stage of my life.

The concept for the Women’s March in Washington D.C. started as germ of an idea a grandmother in Hawaii had who was devastated by Trump’s presidential victory. Because she felt compelled to do something, she created a Facebook event page calling for a march on our nation’s capital. She expected a handful of people to sign up; a day after her post, she had more than 10,000 responses.

From that initial idea, a movement was started. Soon, in addition to the Women’s March in Washington D.C., solidarity marches were being planned all over the United States and around the world in opposition to President Trump’s agenda, and support of women’s rights and human rights in general. 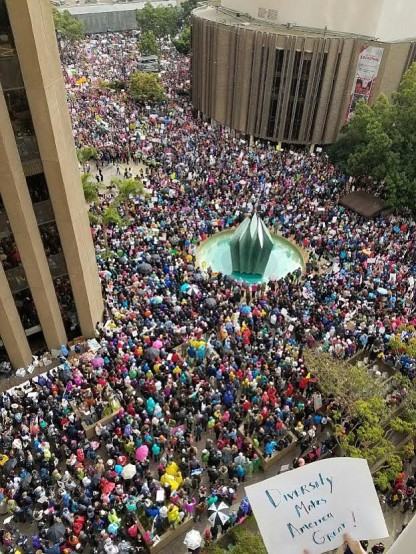 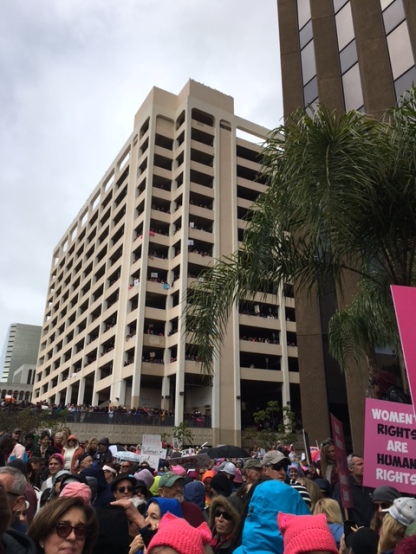 Participants were even watching from the parking garage. 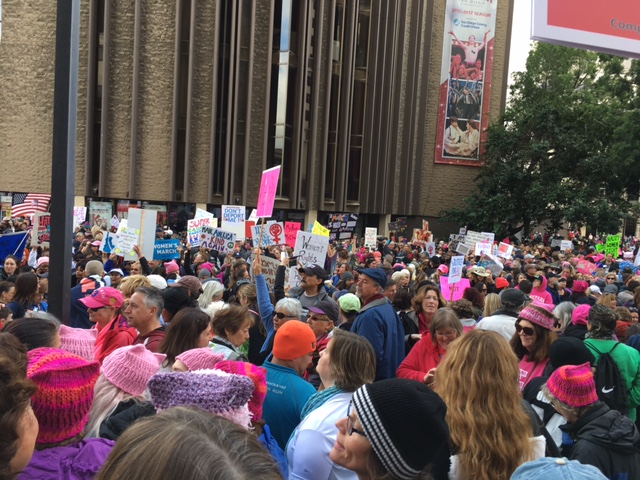 The crowds were large, loud, friendly, and optimistic. Some carried children and some carried signs, but all carried a determination to make their voices heard. As we stood in the on-and-off sprinkling of rain listening to a group of speakers, there was a palpable feeling that the crowd was anxious to start their march and show their numbers.

And march we did: from the Civic Center Plaza, down Broadway towards the Embarcadero, and finally culminating at San Diego’s Administration Building, one mile away. The crowds were so large that by the time the first of the marchers reached their destination, there were still those who were just leaving the staging area. 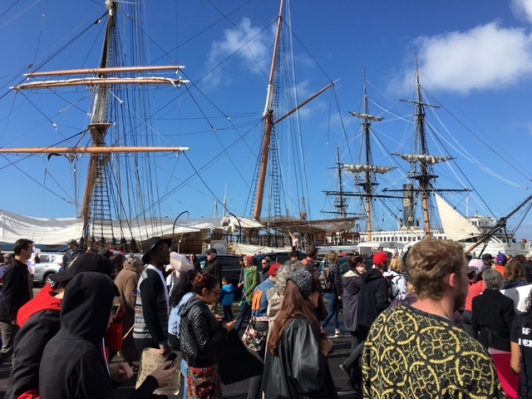 As I was walking with the other participants, I couldn’t help feeling that my mother and father were there right beside me. Many years ago, I joined them as they protested and marched against another very unpopular president and a war that exacted a huge human cost. If they were still alive, I am confident that they would have joined us today.

Media reports are indicating that the “sister marches” in all fifty states have shattered participation expectations. In addition, large crowds attended marches around the world, including, London, Paris, Mexico City, Buenos Aires, and Sydney, Australia. A friend of mine currently visiting Oaxaca, Mexico joined about 500 marches there. Global estimates indicate that over 3 million individuals participated in the marches, up from the 1.3 million initially anticipated.

Respect my existence or expect resistance. 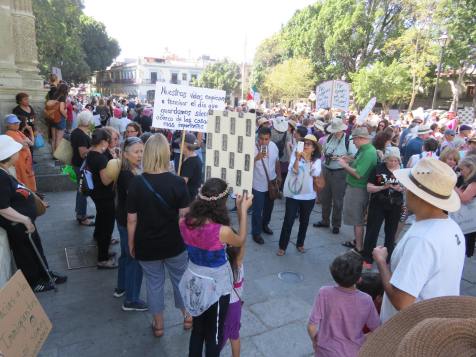 The devil whispered in my ear,

“You’re not strong enough to withstand the storm.”

Today I whispered in the Devil’s ear,

When my husband and I retired, getting rid of excess stuff was one of our primary goals. Although our home wouldn’t qualify for hoarder status, it carried the baggage of stuff collecting that had taken place over the years. Because we both had acquired stuff before we met, a good amount of that stuff was transferred from our individual homes into our shared home. And, of course, stuff continued to enter our home after we got married. Then, after my parents died, some of their stuff also found its way into our growing collection.

Now, several years into retirement, we still have too much stuff. Although we’ve done a pretty good job of curtailing the in-flow of more stuff, the out-flow hasn’t gone as easily as we had hoped it would. We don’t have too much of a problem identifying stuff to be tossed or stuff to be donated; it’s the stuff we no longer want but has value – real or sentimental – that is more difficult to manage.

We had high hopes that eBay would be the perfect way to get rid of lots of stuff and bring in some money in the process. Although we’ve used it to sell several dozen items and we intend to sell more, we have found that the process takes a lot of time. When we started out, we put just about anything up for auction, regardless of its hoped for selling price. We once sold some used cycling cleat covers (yes, someone wanted them) for $8.00, plus shipping. But, after we figured the time it took to research an asking price (yes, there were similar cleat covers being sold), write copy,  take pictures, post the ad, then package and mail them when they sold, we were lucky if we made $3 an hour. Other items, of course, have sold for much more, which made the process worth it. As a result, we have become more discriminating about what is worth selling and what we should donate or post for free on Craig’s List.

Our push to get rid of stuff has ramped up lately. We are enjoying living a less-cluttered life and a better functioning home. We like having a few cabinets that are actually empty. The closet in our guest room has space for guests’ clothes. I no longer seldom am embarrassed when friends or neighbors stop by unexpectedly. As long as they stay out of our offices and the catch-all room upstairs, the illusion of having a well-curated home is maintained.

But, just living with less clutter day-to-day isn’t the only reason we want to get rid of more stuff. We are also looking at a few long-term advantages. Having a home that we could temporarily swap for, say, one in the south of France would extend our travel budget. Renting our house while we take off for extended adventures could provide income and security. Either possibility would be easier to accomplish if our home had less stuff and more space.

When I was younger, I loved acquiring stuff. Now, I view most stuff as unnecessary, restricting and complicating. Slowly, I’m winnowing down my wardrobe to have fewer, but more versatile clothes. Our shelves are being freed of clutter, leaving only a few, carefully selected items. The tabletop piles of paper are being swept away and replaced with… nothing.

Very gradually, we are freeing our home of the tyranny of stuff and welcoming the liberation of having space.

Vacation \ vāˈkāSH(ə)n \ n. 1: a period of suspension of work, study, or other activity, usually used for rest, recreation, or travel; recess or holiday  2: freedom or release from duty, business, or activity

I remember what taking a vacation meant when I was working full time: I’d decide on a destination, figure out how much time I needed to take off work, consult my schedule and my boss to make sure the dates were OK, fill out any necessary H.R. paperwork, work extra hours before my vacation so that I didn’t leave any loose ends while I was gone, then put in even more hours when I returned so I could catch up on all the work that wasn’t done while away.

After one or two days back in the office, it hardly felt like I had been away at all. In fact, I was often twice as busy and felt more stressed than before I left.

Now that my husband and I are retired, we no longer take vacations. Packing our bags and leaving our home for a few days, a few weeks, or a few months, isn’t a “release from duty or business.” We might need to stop our newspaper and mail deliveries, have a neighbor watch the house and water a few plants, or arrange for friends or family to stay in our home while we are gone, but, our time away is no longer “a period of suspension of work or study” nor does it require prior approval. Instead, it is a continuation and enhancement of our retired life.

Rather than take vacations, what we do now is travel. We take road trips. We visit. We tour. We go on great adventures. Sometimes we aren’t 100% percent sure of our itinerary or when we’ll return home. If we decide to stay a little while longer somewhere, no problem. If we see a road less traveled and decide to take it, fine and dandy.

I am so grateful that our retirement has given us the freedom to stop taking vacations from something and instead be able to say “yes, we’d love to,” “yes, we’ll go,” “yes, we will be there.”